Unfortunately, a distinct acetone smell is one of the strongest natural signs that you’re in ketosis. And for those who socialize a lot, it’s definitely one of the most unpleasant ones.

Yes, you can reduce it or even keep it away, but sometimes you just have no time because the meeting is already coming.

(And no, you can’t just chew any sugar-free gum. We’ll explain it later in this post.)

In a hurry? Check out our top pick:

If you’re looking for the best alternative to traditional low-carb chewing gums, Pur Gum is exactly what you need.

This Swiss-made gum contains only natural flavors and a sweetener called xylitol. It’s totally free from aspartame and is perfectly safe for your ketogenic diet.

The flavor lasts long enough to fix bad breath, and six different tastes will never get you bored. 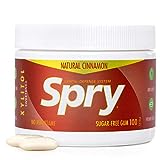 Spry Xylitol Gum series was originally designed to improve tooth dental care. As clinical studies show, the use of xylitol on a daily basis helps reduce the risk of tooth decay because it literally prevents bacteria from adhering to your teeth. For the same reason xylitol is also used as a component of some nasal sprays—it helps fight bacteria.

Luckily for us, not only is this gum great for dental health, but it’s also great to cure keto breath.

Cinnamon flavor lasts longer than others, but don’t expect it to last forever. In fact, due to a lower sweetener and flavoring content, this gum is noticeably less lasting and less sweet in comparison with other keto gums.

However, remember that it was created for other purposes, and its keto-friendliness is just a happy occasion.

But dental health and having a good breath are related closely, aren’t they?

Not only does this gum help you get rid of cavity-causing bacteria in your mouth, but it is also perfectly keto-friendly.

They also say that chewing it might slightly reduce carb cravings and help you be more picky with your food.

Don’t really know if that will be your case, but one thing is for sure—this spearmint flavor is strong enough to clear away any unpleasant smell, whether it’s a keto breath or just a smell after eating a regular meal.

The best thing is that this gum is not overpowering. Definitely worth trying. 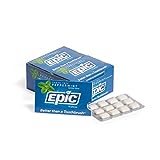 They say that every piece of Epic gum contains 1.06g xylitol and that it’s 45% more xylitol than other brands.

Well, 1.06g is a lot indeed, which might be good to prevent cavities. The best thing about these gums though is that they have no sugar, no aspartame, and no other bad chemicals.

It’s recommended by dentists and nutritionists (again, this is what they say).

Each pack contains 144 pieces, and given that dentists recommend 6 grams of xylitol per day and each gum has ~1g, it’s 24 days of chewing 2 pieces at a time for three times a day.

This gum was created by 2x Olympian Nick Symmonds when he was a competitive athlete.

What makes it so special is that not only is every gum keto-friendly, but it is also boosted with caffeine, taurin, and vitamins B6 and B12. Each of these gums is literally charged with calorie-free energy.

Of course, it’s made of xylitol and is absolutely free from aspartame.

Whenever you need to refresh your breath and/or improve your focus, chew one (or two for an ultra energy boost) of these. But make sure to not exceed eight pieces per day.

By the way, the bubblegum flavor version is made in the U.S.

Just pick any of these chewing gums and your ketogenic diet will be out of any danger.

Did you notice that all of them are aspartame free? But as we know, consuming aspartame won’t interrupt your ketosis.

What is the problem then?

Why Not All Sugar-free Gums Are Good for Keto

The short answer is because not all sugar substitutes are created equal.

Nobody would buy a gum which doesn’t have a good taste and thus manufacturers use various sweeteners to give them pleasant flavors.

Which substitutes are good and which are bad for keto?

The first criterion is the glycemic index. As we know, products with high GI raise your blood sugar levels, and products with zero GI don’t. Our goal is to choose the sweetener with the lowest GI.

As you can see, table sugar has the glycemic index of 65, meaning that it causes your blood glucose to raise significantly. That’s why it’s not allowed on keto.

Sweeteners with the GI above 10 are not safe for keto. Even though the products that use them instead of sugar are, technically, sugar free.

What about sweeteners with the GI below 10? Are they ok?

It depends on what you treat as ok. The absolute majority of sweeteners falls into one of the categories: sugar alcohols, natural sweeteners, and artificial sweeteners.

Sugar alcohols are similar to fiber in some way—they are partly resistant to digestion.

Don’t be afraid of the alcohol part—they don’t contain ethanol which is responsible for making you drunk. It’s just the part of the name which indicates their chemical structure (just like dihydrogen monoxide is the chemical name for water).

Natural sweeteners, as the name implies, are those that are found in nature but structurally are not sugar alcohols.

Artificial sweeteners do not occur in nature but instead are processed by chemical synthesis.

So, which of them are ok for keto?

Technically, all of them are ok. But if you opt for natural foods, you might exclude artificial sweeteners from your diet.

But even if you are perfectly fine with artificial sweeteners in your diet, you might want to learn one thing about the most popular one—aspartame.

You might have noticed that the majority of keto advocates recommend avoiding aspartame.

Let’s find out why.

Aspartame is one of the most widespread (if not the most) artificial sweetener in the world (in Europe it’s codified as E951). Your favorite diet soda and other sugar-free snacks most likely contain it.

Aspartame is nearly 200 times sweeter than table sugar. That’s why, even though it contains calories, the amount needed to sweeten something is small and the number of calories it provides is negligible.

What is the problem with aspartame?

The problem is called “Aspartame controversy.” To make it simple, aspartame has been criticized since it’s initial approval by the U.S. Food and Drug Administration in 1974.

It was accused of causing a wide range of problems from weight gain and headaches to cancer and neurological symptoms.

Do those accusations make sense?

In a nutshell—no, they don’t.

The weight of current scientific evidence says that aspartame is safe as a non-nutritive sweetener.1083774126

But, as we know, there’s no smoke without fire.

Whether to consume aspartame or not is up to you. Contemporary science says that unless you are allergic to it, aspartame is safe for you.

But even the most famous keto devotees, such as Thomas DeLauer, are considering aspartame bad. And Thomas is a massive science fan.

(And I’m not a judge to either blame or praise aspartame. I avoid artificial ingredients because I just feel like doing it.)

How To Choose The Best Keto Gum

The short answer is to scroll back and pick out one of those five.

The long one is to be picky with ingredients. In general, you need to make sure this gum matches these three criteria:​

From the “Why Not All Sugar-free Gums Are Good for Keto” section we know that natural low GI sugar substitutes belong either to sugar alcohol group or to natural sweetener group.

The problem with natural sweetener group is that nowadays it’s nearly impossible to find such a gum, even on the internet.

Luckily, one sweetener, which belongs to sugar alcohol group but occurs in nature, is saving the day.

It is called xylitol. It’s a sugar alcohol which occurs naturally in plums, strawberries, pumpkin, and cauliflower. (And yes, it doesn’t make you drunk because it doesn’t contain ethanol.)

Xylitol is almost as sweet as regular table sugar, but it has a glycemic index of 7 (and glucose has 100). This means that consuming xylitol causes blood glucose to raise significantly lower than consuming the same amount of regular sugar.

Speaking of health risks, there are no limits on daily intake. The worst you can get is diarrhea, but to get it you need to chew at least 50 gums with xylitol in a single day.

Speaking of health benefits, xylitol is thought to improve dental health of active gum chewers. Replacing regular gums with gums sweetened with xylitol seems to have a positive effect, but more evidence is needed.

As for weight management, replacing sugar with xylitol may also help. (Because you get less calories and sometimes less cravings).

Of course, xylitol is not a cure-all. It’s just a small step towards a better health and a better life.

When choosing the best keto-friendly gum, look for the xylitol in the list of ingredients. The ideal situation for keto is when xylitol is the only sweetener.

Also, make sure all flavors are natural—you don’t need half of the periodic table to be put into a tiny piece of gum.

What About Stevia? Can I Chew Stevia Gums on Keto?

Regarding being dangerous to ketosis, stevia is a bit controversial.

While some people report that consuming stevia has absolutely no effect on their blood ketone level, others say that just one cup of tea with just one packet of stevia dropped their ketone concentration down to half.

That’s because, biologically speaking, despite the fact that we’re all humans, the processes inside our bodies differ sometimes.

(Actually, all the time, even twins with exactly the same DNA aren’t completely identical inside.)

At the moment, we lack scientific evidence to univocally claim stevia safe for keto for every single person. It depends, and if you want to know whether it’s your case or not, you will have to try it.

And trying it is tricky because stevia gums are quite an endangered species. Actually, the only one which has enough stevia is SteviaDent gum, and it also has xylitol in the list of ingredients.

Check the comments there very carefully because some flavors include other sugar alcohols. It’s not pure stevia, it just contains stevia to make it tastier.

[adrotate group="1"]
The content we provide at Ketowatt is not intended to replace consultation with a qualified medical professional. By interacting with this site, you agree to our disclaimer.
Menu