Five years ago I was looking into a mirror, thinking that I had already passed the point of no return. Chocolate cookies had won the battle, and, as I thought, the war.

But then I discovered keto diet and opened the door to a brand new healthy life. However, one thing made me upset—do I really have to wave goodbye to those cookies? Yes, they are full of carbs and they didn’t help me look good, but they are… my best friends.

Should I betray them? Fight against cravings for the rest of my life?

No. Only cowards forsake their friends, and I’m not one of them. Yes, I have changed, but so have my friends.

The answer is low-carb, keto-friendly flours.

The best thing about Honeyville Almond Flour is its fine grind. Usually, almond flours are coarse, but this one is milled so finely that you won’t find anything similar on the market. Now you can forget about round balls in your cookies.

The second best thing is that the difference versus any other almond flour is indeed noticeable—just replace your previous flour with this one and everyone around will start asking if you found a new better baking recipe.

Use it to make different baked goods such as cookies, cakes, and flaky pastries—nobody will ever notice that they are made without traditional flour. Actually, the biggest problem is that your keto bakery will start going too fast, so you might need to start spending more time in the kitchen. 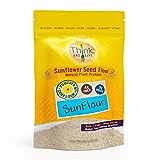 Sunflower seed flour is a relatively new player in the low-carb baking market. It’s made from cold-milled sunflower seeds and turns everything you cook into a nutrition powerhouse.

This flour is a good choice for those who are allergic to nut-based and wheat-based flours. You can use it as an almond flour substitute in traditional keto recipes in 1:1 ratio since their properties are quite similar.

Also, it’s made in the U.S., which is one more good reason to give it a try.

Not all coconut flours are created equal: the quality of Anthony’s flours is second to none. Actually, it didn’t make it to the first or second place simply for one reason—it has more carbs than almond or sunflower seed flours.

But we’ve all heard about the benefits of coconut oil. Unsurprisingly, coconut flour is a nutritional treasure as well. One serving (2 tbsp) contains 2g fat, 2g net carbs, and 2g protein, and is a great source of monounsaturated fatty acids.

Speaking of a slightly higher carb content versus other low-carb flours—what counters it is that you don’t need as much coconut flour for your recipes (because coconut flour absorbs more water). It’s not a 1:1 substitute as it is for wheat or almond flours, and you will need to alter your recipes by either adding less flour or adding more water and eggs.

Using coconut flour for baking is also an easy way to add roughage to your diet because each serving contains 6g of dietary fiber (almost 25% of the recommended daily value for women).

Why you should trust us

What we value on KetoWatt is being honest with readers. So right now I’m being honest—I’m terrible at baking. The only thing I can bake is chocolate cookies (because I don’t need anything else). But my wife bakes much more often so I took her best advice on low-carb baking. But when it comes to manufacturing processes and lists of ingredients, there’s no way anyone can trick me here. That’s why we work as a team. And every time we recommend something, you can be sure that this product is top-notch and keto-friendly.

Why avoid wheat flour on keto?

Obviously, because of carbs.

Yes, whole wheat flour is deemed healthier than white wheat flour because manufacturers don’t remove bran and germ from the kernel before milling it.

Nevertheless, even though whole wheat flour is rich in fiber, it still has too many carbs. So many that just one serving makes up more than half of your daily intake. Not to mention white wheat flour, which is even worse.

The recent low-carb craze has brought a lot of new products to the market, and flours aren’t an exception.

Almond flour. It’s made from blanched almonds (without skin) and is ground finely. The best thing about this flour is that it can be easily made at home. However, if you want your keto pastries to have a perfect consistency without any round balls, it’s best to use a professionally ground almond flour.

Best used for everything from bread to cakes.

Almond meal. Basically, the same thing as almond flour, but with a more coarse texture because it contains the skins.

Almond meal is at its best when used for cookies, quick breads, and as a substitute for breadcrumbs.

Coconut flour. It’s made from dried coconut flesh, and just like coconut oil, it provides MCTs and iron. It has a slight coconut flavor but can be used in both sweet and savory recipes because it takes on the taste of the other ingredients you use.

Because coconut flour absorbs significantly more water than other flours, it’s not a 1-to-1 substitute for them. Moreover, because of that extra water, this flour works best in moist recipes.

Flax meal. As the name suggests, flax meal is made from ground flaxseeds. Therefore, it has the same nutrition and provides nearly the same benefits. By the way, the earliest evidence of humans using flax is dated to the Upper Paleolithic, 30 thousand years ago.

(Which not only makes flax meal good for keto diet but also makes it a genuine Paleo food.)

It has a coarse texture and is not suitable for all recipes.

Hazelnut flour. One more nut-based flour, it’s basically the same as almond flour but is not that popular. Its benefits are pretty much similar to the benefits of its one and only ingredient, hazelnuts.

Best used for everything from bread to cakes.

Pecan flour. It pairs well with savory and spicy flavors, but some ketoers use it even for sweet baking. It’s coarse, and, as for me, a little bit pricey.

Best used for cookies, quick breads, and as a substitute for breadcrumbs.

Sunflower seed flour. This one is mildly sweet with a subtle nutty flavor but is still good enough to be used in a variety of keto recipes. You can also make it at home simply by grinding the seeds yourself.

Best used as a substitute for almond flour in 1:1 ratio.

How we choose the best keto flour

The set of criteria is quite obvious this time. To be the best of the best, the flour should match these four parameters:

Now let’s have a look at our winner in more detail.

Let’s be honest—this flour is expensive, but it’s totally worth it. The results you can achieve with it… you can’t achieve those with anything else.

The secret is the ultra-fine grind. Gluten-free baking is real, and the manufacturer works extra hard to make our experience better. They try to make the grind even finer to make our pastries even lighter and more fluffy.

Speaking of gluten-free baking—these aren’t just words, this flour is certified gluten-free and renews this certificate annually, constantly setting the standard for the best low-carb flour.

Only premium California-grown almonds are used for Honeyville flour. The best thing about almonds is that they retain their nutrition throughout milling and provide you with a decent amount of vitamins and minerals.

Honestly, I’ve been trying to find anything bad about this flour just to avoid sounding biased, but it seems just impossible. Just look at those keto macarons:

Or at the texture on this bread:

A picture is worth a thousand words, isn’t it?

Ok, just to be fair and put a fly into the ointment once again—this flour is pricey.

But you don’t make baked goods every single day, right? And when you do, why not use the best flour possible?

Your health is worth it.

These are the flours that didn’t make it to the top but are interesting enough to be worth mentioning.

Wellbee’s Super Fine Blanched Almond Flour could’ve made it to the first place, but unfortunately, it’s 10% more expensive than our winner. Speaking of its quality, it’s pretty similar to the top pick, but again, the price speaks for itself. Could’ve been the runner-up if we didn’t opt for more variety.

Barney Butter Natural Almond Meal is decent, it’s great as a breading or for baking cookies and cakes. As with any almond meal, it’s coarse. It didn’t make it to the top, but it’s definitely in the top 10. (By the way, it’s made in a peanut-free facility.)

Organic Golden Flaxseed Meal is a good source of fiber and also provides Omega-3 fatty acids. It might not be the best wheat flour substitute, but nutritionally speaking, it’s a great addition to any healthy diet.

Oh! Nuts Premium Kosher Hazelnut Flour is one more good low-carb substitute to regular flours. It’s too pricey and too coarse to be in our top 3 picks, but it’s still an option to consider, especially if you like hazelnut flavor.

Oh! Nuts Premium Kosher Pecan Flour is basically equal to the previously mentioned hazelnut flour except for its pecan flavor. It’s worth trying if you’re a pecan fan.

Nutiva Organic Coconut Flour is great, but it’s pricey. Normally, coconut flour is a cheap low-carb substitute for wheat flour, but this one is even more expensive than almond flours. But if money is not the issue, then it is definitely worth trying.

Other Must-have Ingredients for Keto Baking

Let’s be honest—when we replace wheat flour with low-carb substitutes, we lose some properties of the original ingredient.

Simply speaking, psyllium husk powder is a hundred percent soluble fiber, and it provides all its benefits.

But not only does it aid your digestion, it also helps improve the texture of your baking and keeps everything nice and moist.

It has a unique ability to hold small particles of food together and is used mainly as a thickener. Nutritionally, it consists entirely of dietary fiber and provides zero calories.

Add it to your cookies, cakes, muffins, breads, and pizza crusts to improve their texture.

We recommend Bob’s Red Mill Gluten Free Xanthan Gum. The quantities you need to add are listed on the pack.

Can You Use Whey Protein Powder for Baking?

They are also similar to wheat flour in how they bind food particles together. If you want the consistency to be close to regular pastries, protein powder is a good way to go.

What I don’t like about protein powders though is that they have too much protein (what a surprise), and excess protein can be easily converted into glucose via gluconeogenesis and decrease the level of ketones in your blood.

I’m also not a huge fan of how those powders taste. I’m not saying the flavor is bad, but I just don’t like it.

And what really makes me mad is the design of all those protein powder containers—they look like a usual size pack on steroids. (Just to emphasize: protein powder has nothing to do with anabolic steroids, it’s just an analogy.)

Seriously, why do manufacturers have to inflate them that much?

Nevertheless, if you want to try it, we recommend you get OPTIMUM NUTRITION 100% Micellar Casein Protein Powder.

Whether you’re into baking or just have a sweet tooth for pastries, following keto doesn’t mean you have to give up things you like.

There’s no way you can fit wheat-based flours into your keto macros—that’s true—but it doesn’t matter because we have so many great low-carb flour substitutes.

Just pick the best one, and come back for more recipes (like this awesome keto lava cake)!

[adrotate group="1"]
The content we provide at Ketowatt is not intended to replace consultation with a qualified medical professional. By interacting with this site, you agree to our disclaimer.
Menu